Sometimes you feel lonely and want someone to talk to you. If you think you can’t have human then have a pet bird instead. Because there are some of the species who have such incredible talking ability that will just make you speechless.

If you wish to have a kind of pet like that, then let’s know a couple of them that can mimic and talk!

Now, let’s get started with the types of pet birds that talk.

Look At The Types Of Pet Birds That Talk

Better known as Einstein because they have such a brain that the majority of the birds don’t. African Grey Parrots are known for their super intelligence. And just like others, they too imitate their owners. The most surprising part is that these are a kind of birds that can learn up to 1,500 words (if trained with proper patience and care!). 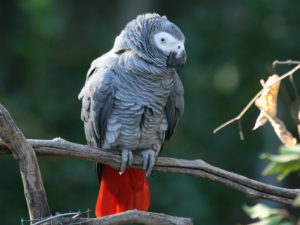 That’s not the end, they are also able to act on commands, identify the color and shape of objects as well as recognize numbers. You will also find them fooling you once they learn to mimic the sound of somebody exactly like a human. But just it has been mentioned, there is a condition which is quality training.

There are two popular sub-species which are the part of the types of pet birds that talk: Congo African grey and the Timneh African grey

These birds are quiet in nature and you will find them very easy to handle. They can also live for more than 60 to 80 years.

One of the most social birds you can ever meet with wonderful talking ability. Like budgies, they too have a tendency to imitate words as well as a wider range of sound. Not just that, they can learn around 20 to 25 words or so! It will not very easy to make them learn them for the kind of tone they have. But, if given proper time, they can master mimicking the right way. So, all these skills usually count on how much you are spending your time in training them, with patience, care, and love. 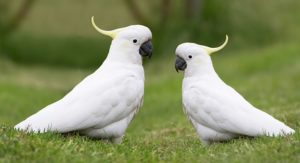 Out of approximately 21 species of cockatoos, you will find four of them to be better at talking: salmon-crested, long-billed, yellow-crested and rose-breasted.

About the perks of having them, there are many. You will find them playful, cuddly and smart obviously! A little pain would be that they love to scream with their high-pitched noise. But that should not scare you. They will need your love because, without that, they might harm themselves and fall ill. They can surely live for more than 60 years but only if you take proper care.

Call them Budgies, call them parakeets, these birds definitely know their ways to amaze you. Their talking capacity is already known to you but we would like to highlight some more interesting facts! 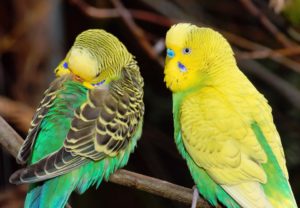 Since they are able to develop remarkable vocabulary, they can learn up to 300 to 500 words while counting up to three. Not just that, one budgie named Puck has also impressed everyone by holding a Guinness record in 1995 to have acquired about 1,728 words! However, it will still be wrong to expect all of them having the same capacities.

Speaking of their talking ability, these birds basically tend to imitate words repeatedly from their owners. If you have a male bird, you will find him to be better at uttering more words than a female.

There are a lot of perks that can trigger you to have them. Budgies happen to be very playful and you will love their affectionate side.

They are easy to maintain and you won’t ever get irritated by their sound since they have a lower noise level. Unfortunately, sometimes you might not understand what they try to say exactly because of that. However, if you leave them free of the cage, they will never be able to destroy any of your stuff.

If you take proper care, they can live about 10 to 15 years. But we would still suggest to you not have them just on the basis of their talking abilities. Love them like the way they are. 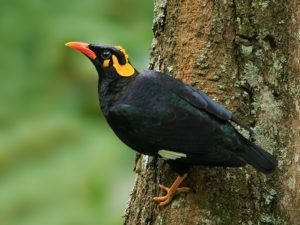 If you want to get introduced to a bird that will give you the vibe of talking just like a human, Hill mynas may appear as first! They are not only able to learn words but can mimic the voice of human in the exact tone. They are albeit able to learn around 200 words which are pretty less but they can grasp the words just like how their owners utter. Plus, they can also produce a wide range of sound like whistles, screeches as well as wails. And that’s their specialty.

You will find two main species of such birds who happen to have more talking power than other species: Common Hill and great Indian hill myna.

Having them as a pet will be entertaining. With their loud noise, you might get mad at them but at the same time seeing them mimicking will be fun.

You surely won’t like their calls and squawks but their sweet personality will surely melt your heart. Macaws are found to be very affectionate who can even greet you! They are a kind of birds that can learn around 20 to 25 words or expressions if given proper training and time.

Although these birds have lesser grasping capacities to hold vocabularies, they are great in mimicking humans. 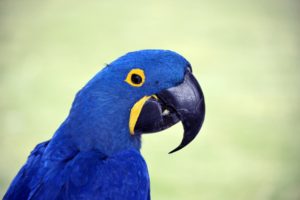 Having them can bring you different advantages. They are entertaining, they will not make you feel alone and most importantly they can interact well with you. They do not have special dietary requirements and are very easy to be taken care of.

Although they are not very noisy once they get friendly with someone, they will start to flaunt their wide range of personality.

However, you will find about 22 species of macaws where some of them can live about 60 to 80 years. Their strong, curved beaks have amazing capacity to crush seeds, nuts and sometimes a shell of a coconut.

I am Maria and adore birds all the time. I love parrots, macaws parrot, Theodore Finch. I would love to review bird feeders, bird foods, and bird toys.

Why Kaytee Parrot Food? Any kind of animal that you keep with you deserves the same good quality lifestyle and good food as you do. Comparing to other pet animals like cats/dogs having birds as a...

Why does a pet lover need a living world cage? Do you feel alone in your house? If you ever feel alone or something is missing in your life, all you need is to get a pet. This can be anything from...